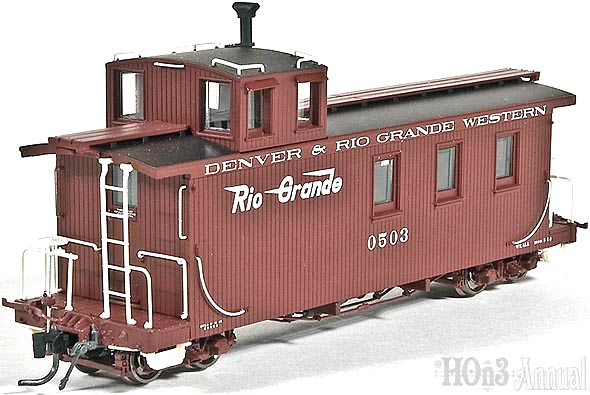 Blackstone Models burst on the scene a few years back with a ready-to-run model of the D&RGW 3000-series boxcar that was head and shoulders above anything that had been offered previously. They soon followed with the D&RGW/RGS K-27 locomotive that is now considered the gold standard for HOn3 motive power. They also continued to add rolling stock including the 6000 flat, 5500 stock car and 1000 series gondola. What was missing from their offerings was equipment to trail those lovely cars and locomotives, and they have recently addressed that omission with a great model of the popular round-roof long caboose. This new model features crisp assembly, beautiful graphics, smooth rolling trucks and excellent prototypical fidelity.

The prototype for this model is a group of cabooses built by the Denver, Rio Grande & Western between 1920 and 1923. Railroad historian Robert Sloan has designated this as the “Class 5” caboose and it represents the ultimate in narrow gauge caboose development*. Built from parts taken from rip track Class 1 and Class 2 caboose numbers 0503, 0505, 0517, 0540 and 0574 at a cost of $2100, they had 25′ bodies, 2′ end platforms and round roofs. These were basically brand new cabooses with some recycled parts and while they retained the old caboose numbers, they benefited from all the lessons learned on the previous caboose classes.

The Class 1 caboose, from which all the Rio Grande, Florence & Cripple Creek and Rio Grande Southern’s narrow gauge cabooses are derived, started as a Billmeyer and Small design. General Palmer, the founder of the Denver & Rio Grande, had been previously employed by the Pennsylvania Railroad and he borrowed the design of the Class NA and NB for his new, narrow gauge railroad. Like the Pennsy version, these were four-wheel “bobber” types with three side windows. Over time, they were rebuilt into the eight-wheel, two side window short caboose D&RGW fans are familiar with. Copies of this style were also built for the RGS and F&CC. In addition, some of these cars donated hardware to become the Class 3 peaked roof, long cabooses numbers 0584-0589. This new 30′ car sat on the underframe of Class 7 boxcar and had a 26′ body. This made the end platforms only 18″ wide, making these hacks quite unpopular with chubby trainmen.

The Class 5 represents a great prototype to model for several reasons. First, due to their late build date, they were the caboose of choice in the late 1940’s to late 1950’s period so popular with modelers. Because the other cabooses had been retired or moved to branch and MoW service, photos of freight trains taken in this era almost always show one of these five cabooses trailing it. For that same reason, all of the class have been preserved and still exist in Colorado. (0503 – Chama, 0505 – Durango, 0517 – Fairplay, 0540 – Durango and 0574 – Golden.) Also, because of all the rebuildings and the different times cars were shopped, the Rio Grande caboose fleet is filled with individual cars with distinctive details. The Class 5 is by far the most homogenous, with dimensions of the cars varying by no more than 1 or 2 inches. There are some minor detail differences between the cars, but Blackstone has included enough extra detail parts that the modeler can have a caboose with any of the five numbers (including odd-duck No. 0503) and be virtually 100% prototypically accurate. No. 0503 was the first car of the class and was built some eight years before the other four cars, and therefore had a few additional oddities. First off, the underbody details are 180 degrees from the other cars, making the long end of caboose the “B” or brake end. The car also has angled stirrup steps, larger end windows on the cupola, and individual sunshades on the cupola windows. Stock, out of the box, Blackstone’s No. 0503 exhibits all those characteristics.

I received samples of the No. 0517 in the “herald” paint scheme and No. 0503 in the later “Flying Grande” paint. An unlettered version of the car is also available, and they made a special run of No. 0540 lettered for the Durango & Silverton. This caboose is only available through the D&S Gift Shop. The caboose is nestled securely in a plastic clamshell package inside the box. The car is painted oxide red with a black roof, the lettering is white and ladders, brake wheels, railings and grab irons are painted white, which is correct, but it is also common for them to be painted silver, especially in the 1950’s. Blackstone offers both colors and even black, dependent on the era and caboose number. In addition, they offer each car in either freshly shopped or sun-faded paint and they have each of those in weathered or unweathered. In all, the modeler has quite a few choices. All the paint and lettering is neatly and accurately applied.

The assembly and detail placement are top-notch. I can find no glue marks or loose parts. Key dimensions of the model match published drawings and the detail parts are finely rendered including such things as the splices on the roof walks, and door knobs on the doors. The underbody details include full brake rigging, including the raised inside truss rod to clear the brake cylinder.

Without any sort of sectional track in HOn3 it is impossible to say with any authority what the minimum turning radius of the model is. Testing indicated it would happily follow the Blackstone K-27 wherever it was able to go. Like the prototypes, the brake rigging, piping and underframe sills limit of the truck swing, but the car appears to be well within the parameters of standard HOn3 operating radiuses.

The model rides on the caboose version of Blackstone’s free-rolling HOn3 truck and is equipped with Kadee #714 HOn3 couplers installed at proper height. The trucks have wipers installed with wires leading to the carbody, but lighting is left up to the modeler. Fair enough as Blackstone took care of the hardest part of the task. The addition of the wipers does reduce the rolling qualities of the trucks. I found that a bit of graphite and running the cars behind trains for a bit quickly loosens them up. They will probably never be quite as free rolling as other Blackstone trucks, but that isn’t a bad thing on a caboose, as trains usually benefit from a little “holdback” on the rear to keep the slack stretched out.

The roof is removable, allowing the modeler to add lighting and/or an interior. The roof is removed by gently squeezing in the sides of the car towards the middle while pulling up slightly on the rood end. Once you have a small gap there, slide in a round toothpick. Continue to squeeze the sides and work the toothpick in until you can add a second toothpick. This is done on one side only, and working carefully, you can release the tabs on the bottom of the roof that hold it unto the body. This technique was developed by Aussie HOn3 modeler Laurie McLean and it works like a champ.

The last step to enjoying your model is figuring out what all the little pieces are in the bag taped to the bottom of the clamshell, and where they go. The extra pieces include sunshades, marker lamps, ladder extensions, grab irons and squares of plastic sheathing for boarding up windows. The sunshades are for the side windows and the grab irons, ladder extensions, and sheathing are for representing caboose modifications during the 1950’s. Photos of the prototype caboose during the era you are modeling are invaluable, and I recommend a copy of the Narrow Gauge Pictorial, Vol 5 – Cabooses of the D&RGW/RGS.

The new Blackstone Models long caboose is an exceedingly accurate model of the prototype available in a ready to run form that narrow gauge modelers could only dream of a few years ago. The paint options and extra detail parts make it in a class by itself. It is the best rolling stock Blackstone has offered to date and a fine value.

*Much of the prototype information in this review comes from Robert Sloan’s A Century + Ten of D&RGW Narrow Gauge Freight Cars, 1871 to 1981.